The mission of the BRIP to create better devices to help visually-impaired patients arose out of Dr. Joseph Rizzo's experience in taking care of visually-impaired patients as a Neuro-Ophthalmologist at Harvard Medical School. During the course of his NIH-funded “Physician-Scientist” award, Dr. Rizzo conceived of the concept of a retinal prosthesis and recruited the enduring Co-Founder of the Boston Retinal Implant Project, Professor John Wyatt of the Massachusetts Institute of Technology. Together, they have built an exceptional multi-disciplinary team of biologists, engineers, and clinicians who have performed basic and translational research toward the single goal of helping the blind become more independent. The Boston Retinal Implant Project (BRIP) research team includes biologists with specialities in: retinal physiology, visual cortical physiology, brain plasticity, retinal surgery and retinal anatomy; engineers with specialities in analog and digitial integrated circuit design with ultra-low power consumption, microfabrication, wireless communication, materials science, hermetic packaging, and software development; and clincians with specialities in Ophthalmology, Optometry, Neurology, and Neuro-Ophthalmology. The BRIP has existed as a “virtual” research environment that has been built by gradual addition of scientists who provided specialized technical expertise. The BRIP includes research laboratories and offices at: the Massachusetts Eye and Ear Infirmary, the Massachusetts Institute of Technology, Boston University, the Cornell NanoScale Science and Technology Facility (Ithaca, NY), EIC Laboratories (Norwood, MA), the University of Louisville, the University of Alabama (Huntsville, AL), and the University of California (Santa Barbara).

The strategic approach of the BRIP is built upon the creation and customization of advanced biological and engineering sciences to develop novel medical devices — this approach is the basis for our moto: “Restoring Sight Through Science.” The BRIP developed technologies that led to the founding of Visus Technology, Inc., which is developing a portable (non-implant) solutions to assist the visually-impaired, and Bionic Eye Technologies, Inc., which is developing a camera-based pair of eyeglasses that works together with an implanted retinal prosthesis to restore vision to the blind. The Visus technology is a form of “sensory substitution,” whereby auditory and tactile information is used to assist the blind. The Bionic Eye technology is implanted around the back of the eye to deliver small pulses of electrical stimluation to the retina to create visual images, and the benefits of the implant can be combined with sensory substitution benefits from a portable device. Both devices are designed to increase the independence of visually-impaired patients. In either case, visual information can also be provided on a micro-display to restore vision to partially-sighted patients.

Though the BRIP helped establish the field of retinal prosthetic research, the BRIP chose not to form a company until its devices had matured sufficiently. Both Bionic Eye Technologies, Inc. and Visus Technology, Inc. have entered the stage of commercialization.

This section highlights selected examples in which the work of the Boston Retinal Implant Project has been featured. 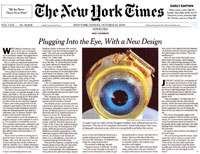 This article described our success in developing a wireless retinal prosthesis that was a precursor to an upgrade that will be used with blind human patients. Our device does not require the use of tacks to hold the electrode array onto the retinal surface. Read the online version here. 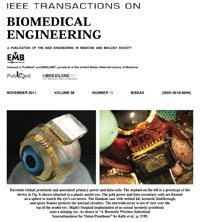 This article, which was featured on the cover of this IEEE journal, described an important upgrade to our retinal prosthesis that included hermetic packaging with demonstrated long term survival in both in vitro and in vivo experiments. 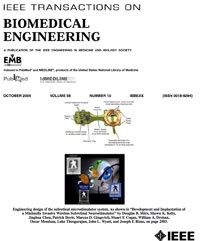 This article, which was featured on the cover of this IEEE journal, described our first generation retinal prosthesis that was successfully tested by demonstrating that wireless communication of power and electrical stimulation commands activated the part of the device that had been surgically implanted. 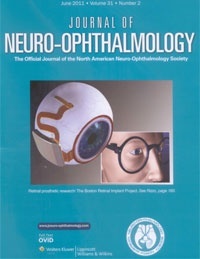 This article, which was featured on the cover of the Journal of Neuro-Ophthalmology, provided an overview of the accomplishments of the Boston Retinal Implant Project, and also discussed the competitive landscape of the retinal prosthetic field.

An implausible, futuristic idea to help the blind see again has become the lives’ work of two men — one a physician named Joe Rizzo and the other an engineer named John Wyatt. The idea, to link an implant on the retina to a pair of “Smart Glasses” that could stimulate the brain to “see” without working eyes, has raised a total of $35 million over the past 23 years from government agencies, including the National Science Foundation and National Institutes of Health and the Veteran’s Administration. But for the first time Wyatt and Rizzo are seeking angel and venture capital investments, now as an incorporated Boston company with the name Bionic Eye Technologies.

IF YOU THINK SIRI and location-based apps make your life easier, just imagine what the technology can do for the sight-impaired. Joseph Rizzo III, the director of neuro-ophthalmology at Mass Eye and Ear, and his team have developed a prototype for “smart” glasses that guide the blind around unfamiliar environments. Here’s how they’ll work. — Courtney Hollands